There is an increasing frequency in the occurrence of abnormal weather phenomena such as sharp increases and decreases in temperature. Under these weather conditions, the heading time of rice changes unexpectedly, which poses problems in agriculture. Therefore, we investigated the effect of temperature on the heading response at different growth stages in rice. During the period from transplanting to heading, the plants were subjected to different temperature treatments, each for a 9-day period, to observe the heading response. For the heading date analysis, “heading date” was defined as the number of days from transplanting to the appearance of the first spikelet. We found that the influence of temperature increased in the order of rooting stage, followed by meiosis, early tillering, spikelet differentiation, and panicle initiation stage in all ecological types and cultivars. In particular, unlike the results reported previously, the effect of temperature on heading during the photo-sensitive period was very small. Meanwhile, the influence of temperature on vegetative growth response at different growth stages was not consistent with heading response. These results can be used as basic data for predicting the variation in heading date owing to temperature variation at each growth stage. In addition, we propose that the concept of day length should be included in determining the influence of temperature on the photo-sensitive period.

For our experiment, we used six rice (Oryza sativa) cultivars (temperate japonica type), two each for early maturing (Odae & Ungwang), medium maturing (Gopum & Daebo), and mid-late maturing (Sanuri & Shindongjin) ecotypes. For all cultivars, 20-day-old seedlings were transplanted on the same day (May 30) in 2017 and 2018 using 1/5000а Wagner pots, with three plants per pot. As a fertilizer, we used a composite slow-release fertilizer based on 9 kg/10a nitrogen, 4.5 kg/10a phosphate, and 5.7 kg/10a potassium at the area ratio corresponding to three plants (planting distance: 30 × 14 cm) instead of the pot area. Seedlings were sown and grown in 406-cell seedling trays. The average number of leaves on the transplantation day (May 30) was 3.9. Temperature treatment was applied to three groups of freshly transplanted rice plants in thermo-regulated glass rooms of the artificial weather facility of the National Institute of Crop Science: the control group was treated with temperatures (hourly automatic temperature control) varying at 9-day intervals in each treatment period based on the 15-year (2001–2016) average temperature in Jeonju area; the low- and high-temperature groups were treated with temperatures 3°C lower or higher than those applied to the control group (Fig. 1). Except for the temperature treatment period of nine days, the rice plants were grown in natural weather conditions. 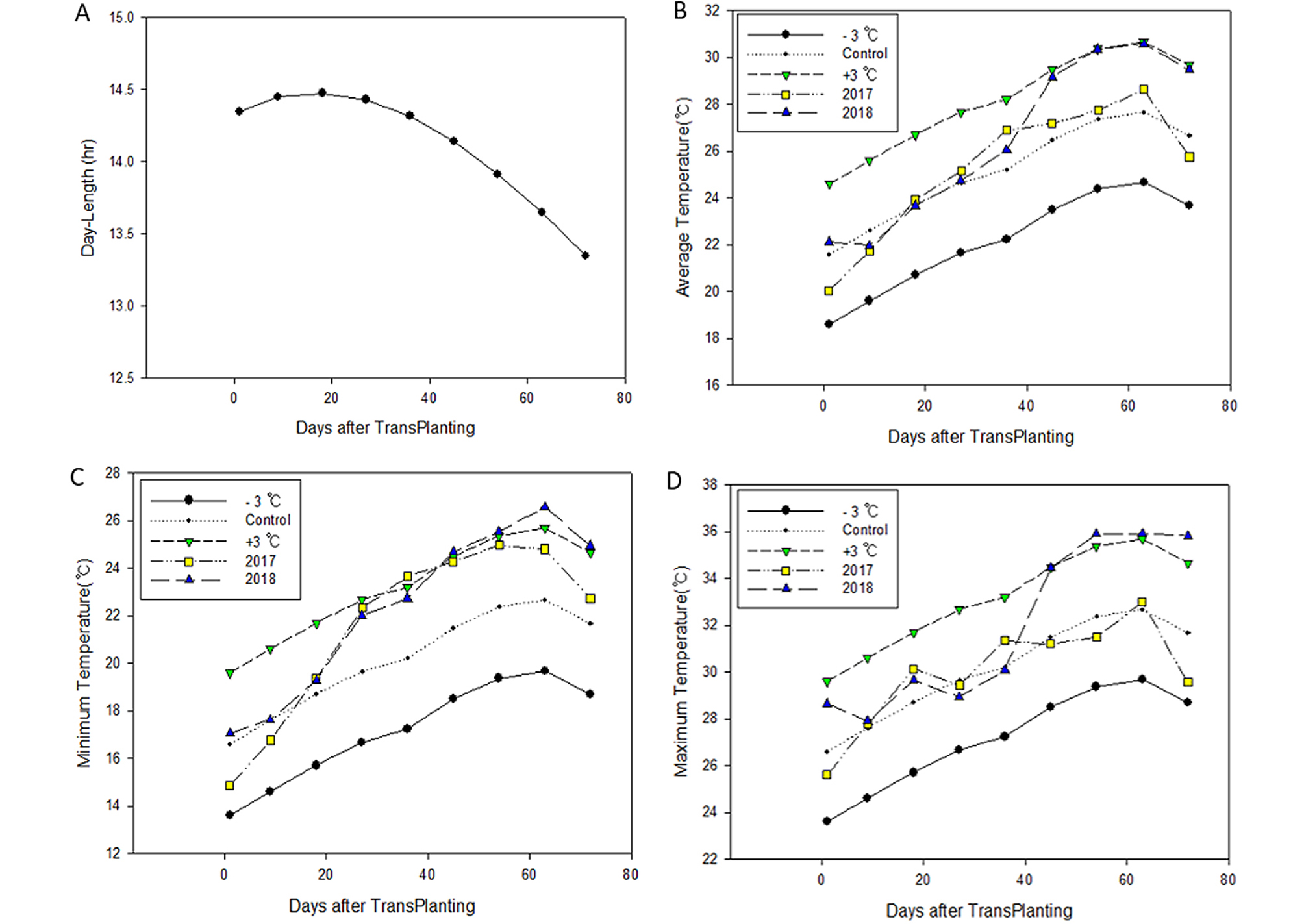 For the heading date analysis, “heading date” was defined as the number of days from transplanting to the appearance of the first spikelet, with nine replicates for each treatment group, as counted between 13:00 h and 14:00 h on a daily basis. The importance index of temperature on heading response in each growth stage was calculated through the following steps: (1) the temperature-dependent heading date variation at 9-day intervals was checked, (2) a value of +1 or –1 was assigned to one-day delay or advance, respectively, compared with the control group, (3) the heading date variation in response to a difference of 1°C in the daily average temperature during each treatment period was summed, (4) the total value was divided by the extent of variation in the corresponding period, (5) the value was expressed as a percentage. The vegetative growth phase was divided, based on the growth response of the control group grown in natural weather conditions, into the rooting stage (from transplanting to the emergence of the first leaf; ~9 days) and the early tillering stage (from the primary tillering stage, with the emergence of the primary tiller, to the secondary tillering stage with the emergence of the secondary tiller from the first node position; 7.5 leaves, ~9 days). The reproductive growth phase is generally considered to be completed in 35 days but varies depending on the criteria for determining the heading date (Vergara et al., 1965; Ikeda, 1975). In our experiment, given that the heading date was determined as the time when 50% of the panicles became exserted from the boot, we calculated panicle initiation, spikelet differentiation, and meiosis stages to be 30, 24, and 15 days prior to heading, respectively (Matsubayashi, 1963; Katayama, 1971).

The temperature-dependent variation in plant height prior to heading was computed using the following logistic model (Black & Leff, 1983):

where E is plant height (cm), t is the number of days up to heading, Er is the curve pattern, which determines the rate of elongation reduction, Emax and Emin are the maximum and minimum elongation rate, respectively, and th is the time when 50% of Emax is reached. Er, Emax, Emin, andth are coefficients determined by nonlinear regression analysis, which was performed using SigmaPlot 11.1.

As shown in Fig. 2, the influence of temperature on heading date varied by growth stage. In all ecological types, increase in temperature nonlinearly shortened the heading date in some growing stages, but there were also stages where no significant changes were observed, especially in the period between 36 and 27, 45 and 27, and 51 and 24 days before heading for early maturing, medium maturing, and mid-late maturing cultivars, respectively. Table 1 presents the magnitude of temperature effect on the heading date in different treatment periods as the difference in the days to heading induced by 1°C increase in the daily average temperature. The magnitude of temperature-dependent variation in heading date increased with an increase in the length of growth period, i.e., in the order of early maturing, medium maturing, and mid-late maturing ecotypes. The same trend was observed in the growth stages nonresponsive to temperature change. The growth period of rice plants is divided according to the days before heading: rooting, early tillering, panicle initiation, spikelet differentiation, and meiosis stages (Matsubayashi, 1963; Katayama, 1971). Fig. 3 illustrates the importance index in each growth stage. In all cultivars and ecotypes, the highest importance index was demonstrated by the rooting stage, followed by meiosis, early tillering, spikelet differentiation, and panicle initiation stages. In particular, during the photo-sensitive period (PSP), namely around the panicle formation time, the effect of temperature change on heading response was greatly reduced, which supports the finding of Ahn and Vergara (1969) that the effect of temperature was insignificant during PSP.

Table 1. Effect of degree of temperature on heading by days before heading.

- Effect of degree of temperature: Changes in heading date by 1°C of daily average temperature

Fig. 4 shows the temperature-dependent variation in plant height growth rate by growth stage. No significant inter- ecotype differences were observed in the plant height growth rate after the 9-day temperature treatment in each growth stage. The average values (± SD) of plant height growth during the entire growth period in the low, normal, and high temperature conditions were 6.5 (± 1.2), 12.6 (± 2.1), and 17.3 (± 2.3) cm, respectively. This difference in growth response was maintained at similar levels until a specific period and sharply decreased after the peak growth period (Th in Table 2), which appeared earlier in the high- temperature treatment group. Contrary to the decrease in the effect of temperature on heading response around PSP, the effect of temperature on growth rate was maintained during PSP and began to decrease after the spikelet differentiation stage. Whereas, the correlation analysis between heading date and post-heading growth components, such as clum length, panicle length, number of spikelets per panicle, and number of panicles per plant, revealed a negative correlation only between the number of panicles and heading date (Fig. 5).

Table 2. Parameters of the logistic function used to describe elongation response in relation to the days after transplanting under three temperature regimes during the growth period from transplanting to heading.

- Values in parentheses are standard errors - "*" and "**" represent significance at the 0.05 and 0.01 probability levels, respectively.

Negative correlation between heading date and number of panicles per plant in all ecotypes.

Effect of temperature on heading during the photo- sensitive period

Discrepancy between heading and elongation response to temperature

Unlike heading response, degree of elongation response increased with the increase in temperature until before the spikelet differentiation stage regardless of the growth stage, and no temperature-dependent difference in growth rate was observed afterwards (Fig. 4). In particular, in contrast to heading response, elongation response sensitivity to temperature was observed in PSP treatment. These results allow the assumption that vegetative growth rate can be predicted in temperature conditions within a specific range but predicting heading response based on them may be prone to error. From the finding that individuals with a higher number of panicles per plant showed an accelerated heading date (Fig. 5), it can be inferred that individuals that grow faster until the photoperiod-induced sensitivity to short daylength produce a larger number of tillers, resulting in faster heading. This can also be inferred from the report of Tsuji et al. (2015) that Hd3a, which regulates heading response, promotes tillering.

Growth stage (days before panicle initiation) of each ecotype in the fourth and fifth treatment period.

The following gives an overview of the key results regarding the temperature-dependent heading response of rice by growth stage and related explanations and interpretations:

1. The effect of temperature on heading response varies depending on the growth stage. It is the highest in the rooting stage, followed by meiosis, early tillering, spikelet differentiation, and panicle initiation stages; in particular, the effect of temperature in the photo-sensitive period (PSP) was verified to be negligible.

2. The analysis results for the temperature parameters influencing heading by growth stage revealed the change in daily temperature difference in PSP as one of the main factors, in addition to the temperature in the rooting and meiosis stages, and an in-depth study of this aspect is considered necessary.

We thank all those who supported us in carrying out this research project. This paper presents the partial results of a study (title: Variation in heading date dependent upon temperature variations in different vegetative growth stages; project number: PJ01248801) funded by the grant of the research project sponsored by the South Korean Rural Development Administration.

Dua, A. B., F. W. T. Penning de Vires, and D. V. Seshu. 1990. Simulation to support evaluation of the production potential of rice varieties in tropical climates. Transactions of the American Society of Agricultural Engineers 33 : 1185-1194.